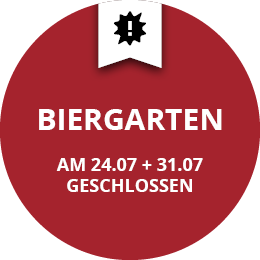 Falkenberg Castle’s history goes back over 1000 years. On 13th November 2015, a new chapter in the history of the castle is to begin. On this day, Falkenberg Castle will embark on a new era in its history. After a planning stage lasting several years, successful financing negotiations, intensive discussions about the concept of the project, and a three-year construction period, the castle opens its doors to the public as a place of cultural interest, a conference centre, a hotel, and a location for events in the field of gastronomy.

From August 2016: Sundays from 2pm to 5pm!
Tours at 2pm and 3.30pm!
Monday – Saturday: Tours not during opening hours; appointment only!

Brausaal (with a capacity of up to 140 persons depending on the seating arrangement), and on the upper floor in the brewery room

Bräustüberl on the ground floor…

There are two halls in the castle, the Knights’ Hall – Rittersaal – and the Capital Hall – Kapitelsaal – available for holding functions. These are on the same floor level, each with a capacity of up to 60 persons (depending on the arrangement of the seating).

Many permanent exhibitions take place on the second floor in the Castle Hall – Burgensaal. This room is later to house the Bavarian-Bohemian Castle Network – Burgennetzwerk Bayer-Böhmen.

A Beacon Project for the Upper Palatinate

The renovation of Falkenberg Castle, which in 2013 was categorized by the Federal government as being of national importance, is the task of a century for the small community of Falkenberg and at the same time a beacon project for the whole Upper Palatinate.

The Castle, located right in the centre of the city upon a massive stone foundation, has been given a new lease of life due to its many different uses. The official opening ceremony, performed by the President of Bavaria Horst Seehofer on 13.11.2015, was followed by a soft opening phase lasting several months. A castle festival and open days on 7th and 8th May 2016 marked the beginning of regular business.

Falkenberg Castle is one of the castles with the longest history on record. Due to its location on a rock high above the Waldnaab, from the Naab it gives the impression of being untouchable. Being intact,  this castle features in most tourist brochures and is featured in many books about the Oberpfalz.

Visitors to the MuseumBurg are guided through four floor levels. Twenty stations provide facts about the castle’s thousand year history, and the life and works of Friedrich-Werner Graf von der Schulenburg, a count, who saved the castle in the 1930s and 40s.