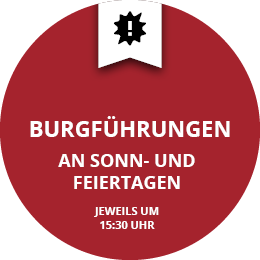 Based on numerous years of conceptual considerations, an intensive planning phase and the construction works starting in 2011, Falkenberg Castle was officially opened to the public during a festive ceremony on 13 November, 2015, as a revitalized castle.

The following picture galleries lead the visitors around Falkenberg Castle. A soft-opening phase of several months followed the opening ceremony on 13 November 2015 until spring. Falkenberg Castle became fully operational on an Open Day and the Castle Festival during the weekend of 7 and 8 May 2016.

The tour begins at the upper entrance to the castle – accessible from the gatehouse across a wooden bridge. The tour through the five main floors ends up at the foot of the castle at the newly made stairway through the rock.

The Conference Centre below Falkenberg Castle was also officially opened on 13 November 2015. It is a new building for conferences andmeetings next to the Falkenberg communal brewery.